‘Carver is astonishingly skilled at the difficult feat of writing in a style reminiscent of the time while imbuing the narrative with a twenty first century sensibility.’ – Martin Lake, author of The Lost King series

‘There is skulduggery, heroism, vice, betrayal, avarice, passion, kindness and the redemptive power of love, all interwoven into a tale that I felt really transported me back to how it must have felt to live in that period. The 21st century seems tame by comparison.’ – Mark McKay, author of The Severance Trilogy

‘Where does the fiction start and end? What part of Jack Vincent is real, what part Stephen Carver’s imagination? This is a magnificent tour-de-force, the book of a lifetime that Mr Carver was born to write. The similarities with our own age are uncanny. Human nature doesn’t change much. I look forward to the second volume with anticipation.’ – John Uttley, author of Where’s Sailor Jack?

‘A fascinating and gripping story … The early scenes in the Marshalsea debtors’ prison are indelibly evocative and make one realise just how desperate life was for so many at that time, and how privileged the majority of us are in the western world today by comparison – though it’s sobering to reflect that inequality is rising and that wars and circumstances beyond their control still impoverish billions of the world’s citizens. The insights into the Machiavellian twists and turns of literary society at the time are fascinating and equally believable; the action scenes at sea for me, as an amateur sailor and naturalist, were the magnificent icing on the cake.’ – A.P. Jessett, author of Mother Earth

‘Couldn’t put it down. This book is an excellent Victorian historical novel.

I have always been interested in Victorian penny dreadfuls as well as the history of Chartism (a working-class political movement). To see the biography of a penny a liner married up with glimpses into the history of Chartism is a dream come true (some prominent Chartist sympathisers, after all, were penny novel writers, such as G. W. M. Reynolds).

I don’t want to give too much away about the plot as that would be unfair on prospective readers. Instead I just want to comment on Carver’s writing style: he captures the best parts of Victorian novel writing without being too tedious. Yes, there are digressions as Victorian novelists used to insert into their writings, but Carver – himself an academic of 19th-century literature – is not tedious with (unlike his Victorian forbears). Moreover, the plot is intricate enough to keep one entertained and wondering what is going to happen next.

All in all, a very entertaining read and a purchase that you won’t regret.’ – Stephen Basedo, University of Leeds

This is a rip-roaring saga that would make a great TV series, rank and steamy with historical authenticity and drawing a big audience. It’s full of dramatic scenes and adventure, ripe sensory detail and characterisation that sometimes feels almost Dickensian – which is interesting because Dickens is a minor character in this novel. What the author has done is use his knowledge of the period to write a story that’s very much in the spirit of the popular but vulgar crowd-pleasers written by the protagonist: bawdy and coarse but with a kind of romanticism too. Just as Jack Vincent makes pre-Hollywood heroes of his pirates, the author makes an engaging anti-hero of Jack. But this novel is very much more rewarding than the kind of stories Jack sells, which he himself knows are manipulative, shallow and hastily assembled pot-boilers written to a formula with no subtlety. Jack is more complex and human than the swashbucklers he offers, and the style of the novel is a great deal more sophisticated, stylish, measured and elegant. It’s written with authority, and I’m not just talking about period knowledge. Carver is a writer with a command of language, and this enables him to adopt the spirit of the penny-a-liner but the literary finesse of the classic novelist who, within its pages, looks down on our Jack. It’s outside my usual diet but I found much to appreciate here, and it’s good to find an author going his own way at a time when cheap, slight pot-boilers sell again – not least on newspaper stands. – Sue Hampton, novelist 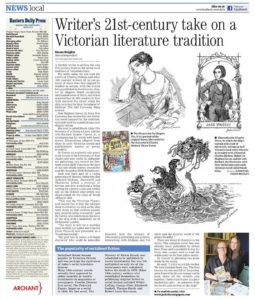 A Norfolk writer is putting his own 21st-century twist on the serial novel tradition of Victorian times.

For while today we can read the novels of Charles Dickens and other 19th century writers all in one go, many of them were first enjoyed by readers as serials, with the stories being published in instalments, chapter by chapter. Much excitement surrounded some of them, and it was reported that in 1841 readers in New York stormed the wharf when the ship carrying the final instalment of Dickens’ The Old Curiosity Shop arrived.

Now Stephen Carver, 52, from New Costessey, has created his own historical novel inspired by the tradition, and each week he is publishing a new chapter online.

His book is called Shark Alley: The Memoirs of a Penny-a-Liner, and his wife Rachael ‘Gracie’ Carver, 31, is accompanying his words with hand-drawn illustrations adapted from those in early Victorian serials and publications known as penny dreadfuls.

Dr Carver, an academic who previously taught at the University of East Anglia and now works in independent publishing, has created the fictitious writer Jack Vincent as the hero of his tale which centres around the real-life troopship HMS Birkenhead.

Jack was once part of a rising generation of literary celebrities that included Dickens, Ainsworth and Thackeray before a reversal of fortune saw him scratching a living writing for a penny a line and setting sail on the ill-fated ship which was shipwrecked off the coast of South Africa in 1852.

‘This was the Victorian Titanic, and legend has it that the soldiers stood to attention on deck as the ship went down so that civilian passengers could be safely evacuated,’ said Dr Carver, who interweaves the story of the ship with a backstory set in Dickensian London.

‘The story is told by a working class Norfolk journalist and Chartist [Jack Vincent] and presented as a “found manuscript.”’

‘My goal was to create a fictional character who could be plausibly inserted into the history of 19th-century publishing and politics, interacting with Dickens and his circle and the murkier world of the penny dreadful.’

Review by Michael Forester, novelist, poet and author of Dragonsong

I used to think I knew Nineteenth century history and literature. And then I read Shark Alley. Spanning the first half of the century, the time setting of this remarkable book allows the author to explore his evident passion for Victorian literature alongside his sympathies for the emergence of the British working class political movement. The narrator, Jack Vincent, leads us seamlessly from his origins in Georgian rural England to early Victorian London and on into the Colonies.

Here in spirit and subject matter I find so many of the greats on whom I cut my own emerging literary awareness. Here is Thomas Hardy in the narrator’s early rural years, here is George Eliot’s Eppie in the golden curls of Jack Vincent’s little sister Sarah, and here woven into plot as well as the subject matter is Thackeray. But here beyond all others is Charles Dickens whom it seems is the writer that the narrator (and dare I suggest perhaps even the author?) would most like to have been himself. Thus we are drawn from the horrors of a medically unattended death in childbirth (the narrator’s mother) through the comparable horrors of Marshalsea debtors’ prison, on into the terminal horrors of the unattended death in the squalor of the London slums of the author’s father (I cannot bring myself to disclose the truly shocking detail Stephen Carver describes). Dr Carver’s Victorian England is one in which the grim life of the rural and urban poor is exceeded only by the grim death that follows it. Here, in consequence, I do not find the Brontës, and here I most definitely do not find Jane Austen.

The narrator’s personal journey takes him on the troop carrier Birkenhead to South Africa where, it is no secret to disclose, it is wrecked. Vincent is present throughout the journey and the wreck, describing in graphic detail the fate in the titular Shark Alley of those that did not make it to the lifeboats – as well of that of some that did. These two story lines of the early and middle years of Jack Vincent are woven into an alternating narrative that keeps the plot moving at a pace that retains the reader’s interest, perpetuating the vehicle for the author’s real interest which lines in social history…

You can read the full review on Michael’s blog

For more reader reviews, check out our listings on Amazon and Goodreads

With thanks to everyone for their interest and support! 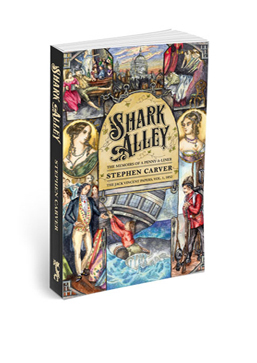